With the cost of living on the rise, it can be hard to get ahead. Many Canadians can feel stretched thin as they try to squeeze more from their budget.

In a recent survey (2022 BDO Affordability Index) it was found that over three-quarters (78%) of Canadians say due to inflation their personal finances have worsened.

The study also mentions that over half (54%) are living paycheque to paycheque, which has increased by 3% since the previous year. Additionally, over a third (35%) of Canadians also say that it’s become challenging to feed their families. Since money is tight there is less of it for debt repayment or savings, with spending towards  groceries, rent or mortgage, and other essentials being the primary reasons for saving less. As things become increasingly challenging, this can lead to unwanted financial stress that’s best avoided. 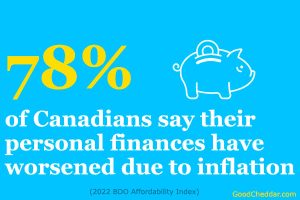 Start With A Budget

With over half (51%) of Canadians reporting they don’t have a budget, it’s an easy way to start tackling your finances if you don’t have one. In a separate study by the Canadian Financial Capability Survey (CFCS) it was found that near 20% would benefit from having a budget.

Many that don’t use one suggest reasons for not budgeting like they don’t have enough time, they find it boring, or find it overwhelming. Those that use a budget are found to be less likely to fall behind on financial commitments, more effective with managing their finances, and less likely to find themselves needing to borrow a personal loan. This is mainly due to the fact that those with a budget are more likely to stay on top of their bills and expenses.

It’s in your best interest to start by learning how to build a budget that works so that you can take the first step towards managing your finances more effectively, and getting away from living paycheque to paycheque.

When you have taken that first step to create a budget and are aware of where every dollar goes, you can start making decisions regarding how your money is used. This can include paying more towards debt or cutting costs where possible.

It isn’t easy for most, but if you’re serious about putting an end to living paycheque to paycheque, it’s likely some sacrifices will be necessary. Some of these might seem extreme, but it can take more than small lifestyle changes like putting an end to eating out and brown  bagging instead.

Housing – whether you own or rent, there might be some options to save. Most of us have more space than they need and downsizing might help. Location can be a factor too, like if you live in a neighborhood that might offer convenience and cut your work commute short. You might be paying a premium for that and it’s something else where you could weigh the pros and cons. If you were able to save $500 or more per month that you could use for paying down debt or saving, wouldn’t you consider a short commute?

Transportation – having a car is great as it provides convenience. If you’re a couple and have two cars, then that goes double. In Canada the cost of car ownership can average $700 or more. This is determined by all associated costs like insurance, car payments, gas, parking, repairs and so on. In most cities using public transportation with a monthly pass would reduce this expense by 60-70% overall. For many, this could be close to another $500 (or more) that could be used for debt or savings.

Dining Out – clearly there’s new found money to claim here. Reducing the amount spent going out for food and beverages presents another way to curb your spending. While this isn’t suggesting that you don’t stop altogether and stay home to count your pennies, we are pointing out that this can be another place your money gets siphoned and you could fare better by trying to be more frugal about how it’s spent. Many of Canada’s financial experts would suggest something similar.

Cut the Cord – it’s likely you have a number of subscriptions and recurring expenses. And that some of these might not be used as much as assumed. Some of these might be streaming services like Netflix or Crave, or perhaps you can look at memberships like the gym or cut the cable if you have a streaming service. Taking a hard look here is certain to help you find additional money to save.

These are just a few ways to get a handle on things and start helping yourself to get out of debt where the interest can be expensive for loans or credit cards. The hardest part is taking the first few steps, but creating a budget is only a positive move and one that makes sense.

Some simple but solid advice to consider as you begin your frugal financial journey:

1) Save more than you spend

2) Live within your means

3) Pay down debt right away, and avoid carrying a credit card balance

If you follow these principles, it can help you tremendously in the long run.

How to Manage Your Money With Debt

How to Improve Your Financial Future

There are many considerations when developing the best strategy for your family’s financial future.  Your family’s age, composition, educational attainment, gender, income […]

How to Get Started with Money Management

When it comes to personal finances and money management, you want to stay on top of things at all times. If you […]

Saving For Your Future – What You Need to Know

When people think of personal finance, they often think of a boring budgeting exercise to track how they spend money on ordinary […]